As a city's ITS network increasingly becomes the foundation of serving citizens, maintaining the highest availability, performance, and security make up the foundation that matters the most. EtherWAN Systems is leading the way for supporting advanced transportation systems.

Just ask the City of Surprise in Arizona.

Chances are if you think of Arizona, you think of intense heat.  On June 29, 1994, the temperature in Lake Havasu, Arizona hit a scorching 128 °F and on Jan. 7, 1971, at Hawley Lake, a thermometer registered a temperature of -40°F, a reading that turned out to be the lowest temperature ever recorded in Arizona. With those kinds of temperature extremes, the City of Surprise is no stranger to having to create hardened networks that can withstand brutal summers and relentless winters.

Located about 30 minutes from downtown Phoenix, Surprise is one of America's fastest-growing cities, as well as one of the top ten safest cities in the U.S.  With its breathtaking mountain parklands, a regional lake and pristine, open Sonoran Desert, Surprise has a magnetic appeal to businesses, entrepreneurs and startups alike.

With 108 incorporated square miles and 302 square miles of city-planned area, the ITS (Intelligent Transportation Systems) team has its hands full.  Not only do they have to keep the rapidly growing city's traffic network running smoothly, but they must do it in some of the most inhospitable weather imaginable.

As one can imagine, the Surprise ITS team take their network very seriously. “We were getting increasingly frustrated with the lack of support from our previous vendor,” said Albert Garcia, ITS Supervisor for the City of Surprise. “We would have to email someone outside of the country to do something as simple as downloading a firmware upgrade,” he continues. Which is why in 2012, when their incumbent network switch provider started faltering on support and customer service, the City of Surprise decided to turn to a company that could give them the consistency they required.  After a rigorous search and testing of a myriad of hardened switch manufacturers, they confidently chose EtherWAN.

“EtherWAN's support has been great,” says Garcia.  “As we work towards maximizing the efficiency of our network and building out most of our communications infrastructure for the next 15 years, EtherWAN has been a terrific partner.”

And like most cities and municipalities, finances and budget are always a concern.  Surprise has chosen the hardened-grade EX78000 series. This switch features 8 PoE ports for cameras and other devices, 4 gigabit Ethernet ports and 4 gigabit SFP ports. “EtherWAN not only provides a rock-solid product, but they do so within our budget,” concludes Garcia. 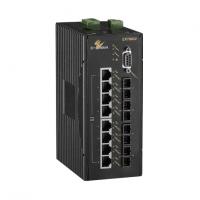