From Disneyland to the Honda Center, and Angel Stadium to the Anaheim Convention Center, the City of Anaheim boasts a number of attractions. Keeping the tap on for millions of tourists and hundreds of thousands of residents each year is no small feat. The City of Anaheim in Southern California has made vast improvements to establish their state-of-the-art water facilities. See how EtherWAN's expertise supported network upgrades at the City of Anaheim Water Utility.

Today, the City of Anaheim Water Utility delivers over 63 million gallons of water daily through:

The city's Lenain Water Treatment plant was originally constructed in the 1960's and was plagued with communications, accuracy and downtime challenges. Clarence Choe, Manager of Anaheim Water Utility SCADA and Automation, knew an improved network and the right partners were the keys to success. "I learned that EtherWAN switches were used throughout our traffic system, so I gave our transportation department a call," said Mr. Choe. "The traffic department was pleased with the reliability of the switches and we knew EtherWAN was local, so it made the decision of choosing EtherWAN easy. What we didn't realize, was how big of a role EtherWAN would play in this network—even what they do for us today."
The old network lacked redundancy and critical network maintenance was outpacing the department's abilities due to the office-grade switches being used throughout the network. Their SCADA (Supervisory control and data acquisition) system architecture was based on unmanaged Ethernet switches, making the network even-more challenging to troubleshoot and configure. At the time, the hodge-podge network was running at 100 mb/s, but these speeds were hindered by the office-grade switches.

The solution implemented for the City of Anaheim was driven by the need for improved communications through an accurate, easy-to-use Central Monitoring System (CMS). In addition, the city already heavily invested in many other components including improved communications with field equipment, so integration with the existing elements was crucial. To get to this goal, the network was upgraded with:

Bandwidth:
The original core network was unable to support new IP cameras, even though it was 100 mb/s architecture. By using EtherWAN's hardened EX7100 series switches throughout the treatment plant, pumping station, wells and reservoirs allowed the network to maintain consistent and reliable speeds. As the city continues to expand and rebuild facilities, EtherWAN today is installing EX78000 series switches. Benefits of installing the EX78000 is the 1-gig ready speeds, so the city is prepared for even-faster network speeds in the future.

Redundancy:
High-speed recovery is maintained through a new fiber primary path supported by switches with layer 2 management capabilities. The switches implemented were EX77000 series that enabled Alpha-Ring (α-Ring) technology. Alpha-Ring is a proprietary protocol developed by EtherWAN to overcome traditionally slow IT redundancy technology including STP and RSTP. In less than 15 milliseconds, Alpha-Ring's redundancy mechanism allows the high-speed network to find backup paths. Advanced Alpha-Ring technology not only improves the traditional STP/RSTP recovery time, but also minimizes possible packet loss during the recovery.

Segmentation:
Following network design best practices, network segmentation was critical for both the short and long-term success of the network. VLAN Segmentation was based on: device type, service, geographic location, and function. Physically, this is accomplished in large part through port assignments, which vastly improved network management abilities and performance. Now, the network efficiently contains specific traffic to designated domains.

Reliability:
Previous switches for the network were typical office-grade switches. While these switches functioned well in indoor environments, in reality, many of these switches were positioned in outdoor cabinets where maintaining a friendly temperature was a constant battle. The EtherWAN switches implemented were all of hardened specifications (-40 to 165F). Triple-digit summer heat and humidity are no match for EtherWAN's switches with a fan-less design, hardened components, and redundant power supplies.

Security:
Public safety is at the core of infrastructure improvements and for the City of Anaheim, it was the most important priority. The network is now connected to a hardware-based double firewall. Encrypted user logins, rigid VPN access policies, ACL (Access Control List), MAC filtering, and 802.1x authentication were all implemented for heightened security. The EtherWAN switches implemented comply with these and industry best practices.

SCADA:
With all the network improvements, the City of Anaheim was able to vastly improve the functionality of the SCADA system. A new GIS (Geographical Information System) and OMS (Outage Management System) was now supported on the City's CMS. This allows the water department to easily pinpoint locations of potential problems, analyze the data, and manage work orders, if need be.
Today, the City of Anaheim Water Utility is considered a best-practice leader in network management. The goal of an accurate, easy-to-use system is now realized and the system is effectively maintained. Downtime is significantly minimized and improved network diagnostics mean identifying and fixing problems are quicker than ever. Even though Mr. Choe is always looking toward the future, EtherWAN would like to take a moment to recognize the powerful direction he's taken this mission-critical department. Thank you for your continued support of our Anaheim-based company. So, what does the future look like for the water department at the City of Anaheim? EtherWAN switches are being upgraded to accommodate core gigabit Ethernet speed and an even-faster 10 gigabit Ethernet backbone. Additionally, a focus on system consolidation and utilizing existing fiber bandwidth are main priorities.

Products Incorporated in Design:
► EX77000 Series Used in the main network, 4 of these switches are part of the backbone of the network. Although these are layer 3 switches, the network is layer 2. This setup allows the ultra-quick recovery time of Alpha-Ring and leaves room for future segmentation.

► EX71000 Series These din rail devices are located throughout the network and serve as nodes to communicate with PLCs that support water movement operations and other equipment.

► EX78000 Series To meet future needs, this series switch serves the same purpose of the EX7100 series, but is equipped to support gigabit speeds. 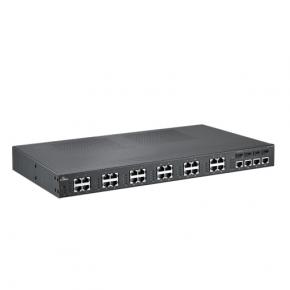 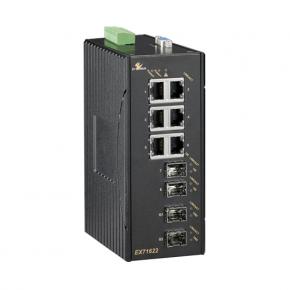